skip to main | skip to sidebar

Because I didn't realize I hadn't posted it officially here, but I have promoted it solely on Twitter, this may have slipped through the cracks a bit. But, the news is that Big D Hockey now has it's own URL!

Please visit http://www.bigdhockey.com to read anything new in Texas hockey news. See you there!
Posted by OneCoolMonkey at 2:08 PM 38 comments: Links to this post

The Central Hockey League (CHL) trade deadline expired on Monday at 3:00 PM (CST) with very little movement. The Tulsa Oilers made two deals and several players who were dealt prior in the season were on the move again finding new homes at the deadline.

The Mississippi RiverKings made a late splash finalizing a deal just minutes before the deadline expired that had high-scoring forward Martin Gascon of the Tulsa Oilers on the move again. Gascon was traded from the Arizona Sundogs to the Oilers on January 27th and in six games with Tulsa he scored a goal with an assist. On the season, Gascon has 46 points (8-38=46) in 47 games.

The other deal made by the Oilers sent forward Jereme Tendler to the Corpus Christi IceRays in exchange for defenseman Matt Smyth. Tendler has four goals and three assists in 36 games with Tulsa this season. Smyth has three goals, seven assists and 113 penalty minutes in 44 games with the Rays this season.

The Laredo Bucks made a four player swap with the Rapid City Rush on ‘deadline day’ acquiring forward Josh Bonar and the rights to forward Mickey Gilchrist from the Rush in exchange for forward Mitch Stephens and defenseman Ryan Hand. Bonar has no points in five games with Rapid City but was a 20-goal scorer a year ago with Rio Grande Valley. Gilchrist is currently playing in Asia but could join the Bucks in the coming weeks upon his return to North America.

The Rush get Stephens (acquired by the Bucks from New Mexico at the end of January) who has 50 points (14-36=50) in 47 games this season combined with Laredo and New Mexico. Hand has two points (1-1=2) and 57 penalty minutes in 22 games with the Bucks.

Deadline Deals:
-Mississippi gets Jason Weitzel (F) from Amarillo as a part of future considerations from a previous trade
-Mississippi trades Weitzel to Tulsa along with future considerations in exchange for Martin Gascon (F)
-Corpus Christi trades Matt Smyth (D) to Tulsa in exchange for Jereme Tendler (F)
-Laredo trades Ryan Hand (D) and Mitch Stephens (F) to Rapid City in exchange for Josh Bonar (F) and the rights to Mickey Gilchrist (F)
Posted by OneCoolMonkey at 10:22 PM No comments: Links to this post

Stars May Be Buyers at the Deadline 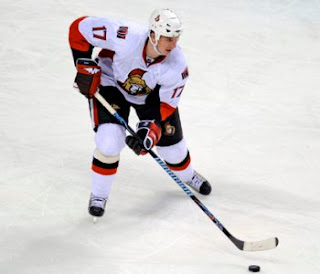 The Dallas Stars' hot play of late is not going un-noticed around the league. Winners of five games in a row, and going for their sixth in-a-row tonight against Colorado, the Stars are hunting down that 5th playoff spot in the West. This is the type of team the pundits around the league envisioned when they were previewing the league last summer. After a rough start, they have finally gotten here.

The strong play of younger players and new arrivals have really boosted the Stars in their play. James Neal and Loui Eriksson have both been having banner years - although he probably won't win it (the competition is VERY stiff), Neal is in the chatter about contenders for the Calder Memorial Trophy, the award given to the league's top rookie. Although quiet in the points department, Brian Sutherby has really chipped in with some great physical play since his acquisition in December. And, of course, there's Brad Richards. After a slow start, he has become the Stars' leading scorer.

There are rumors that the Stars may still be in the hunt for that "missing piece" before the trade deadline at the end of this month, though, and I have to agree that it's a strong possibility. Although the offensive side of things has looked pretty strong all season, the defense has been suspect at times, as has the goaltending, and those are areas the Stars may want to shore up before the deadline passes.

Before suffering a broken hand in last night's game against the Avalanche, Toronto's Tomas Kaberle was one of the most talked about names for available top-tier defensemen. Kaberle has a no trade clause in his contract, but he has said many times before that he is willing to waive it if he is not in the Maple Leafs' long-term plans. It still appears he isn't, but with this injury, he may be much more difficult to move at the deadline. I wouldn't completely rule him out, however, as he is arguably the most talented defenseman available when he's healthy.

Because of this injury, I think the Stars will look elsewhere. They still want a puck-moving defensemen who is a proven contributor, but I believe they want someone who can step into that role as soon as he's acquired. They may look at another Canadian team in the Eastern Conference - the Ottawa Senators. Filip Kuba is in the final year of his contract, and will be an unrestricted free agent this summer. The Sens will probably want to get what they can for him while they are able, and the Stars are a prime canidate. Kuba is a capable, offensive-minded D-man who knows how to chip in and be mobile. Kuba has 25 points this year (1 G, 24 A) through 41 games.

Whether or not the Stars look for a goaltender remains to be seen. With Marty Turco's strong play of late, and the organization's announcement that they're not looking at anyone else to start games this year, that speculation is starting to dwindle. They may wish to get another able veteran if they can find one at a reasonable price (no small feat) if they are worried about Stephan's lack of experience for a playoff run, but more than likely they will stay put in this area. Personally, as I have stated before, I would like to see them sign Curtis Sanford. He'd be a lot more comforting as a backup if things get serious. Let's just hope no rash decisions are made...the chemistry is finally looking good this season.
Posted by OneCoolMonkey at 5:35 PM No comments: Links to this post 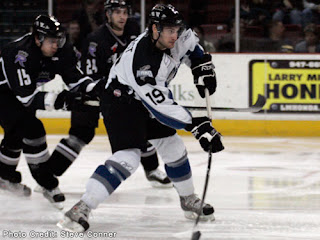 Boise, Idaho – The Idaho Steelheads announced today that forward Tyler Shelast has been loaned to the American Hockey League’s Hamilton Bulldogs via the Dallas Stars. Shelast is currently under contract with Dallas, Idaho’s NHL affiliate.

The 24-year-old Shelast began the 2008-09 season with Hamilton, playing in three games, before being reassigned to the Steelheads by Dallas. In 23 games with Idaho, the 6-1, 205-pound rookie has scored 7 goals and 7 assists for 14 points, and racked up 21 penalty minutes.


The Steelheads play the second game of a two-game set in Bakersfield on Saturday. Idaho (25-14-3) scored four unanswered goals and battled back from a three-goal deficit to defeat the Condors (14-26-6) 4-3 last night at the Rabobank Arena. They travel to Stockton to take on the Thunder on Monday.
Posted by OneCoolMonkey at 3:18 PM No comments: Links to this post

The Central Hockey League announced today that Scott Sheppard of the Texas Brahmas has won the Oakley Three Stars Award for the month of January/2009. Sheppard will receive a pair of Oakley THUMP sunglasses which feature blue tooth technology and a built in MP3 player. Learn more about the wide range of Oakley products at www.oakley.com.

Sheppard scored a league-high 13 goals during the month and also had four game winning goals. All four of his game winners came in either overtime or a shootout. The Brahmas leading scorer with 52 points finished with one First Star nod and five Second Star recognitions. On Tuesday, Sheppard was named the Sher-Wood/CHL Player of the Month for January.

The Central Hockey League (CHL) announced today that Laredo Bucks forward Jeff Bes has been voted the winner of the CHL Performance of the Week for the period of January 12-18. The Tillsonburg, Ontario native wins the honor thanks to his four-point night (one goal, three assists) on January 16th in the Bucks 6-3 win over Corpus Christi. His four points also pushed the 6th year Buck veteran to a milestone reaching 900 career professional points.

Fans can vote for the winner through Monday, February 2nd with the winner being announced on Tuesday, February 3rd.
Posted by OneCoolMonkey at 12:45 PM No comments: Links to this post

The Central Hockey League announced today that the recipients for the Oakley CHL Player and Goaltender of the Week for the period ending January 25th, 2009 are forward Bobby Chaumont of the Mississippi RiverKings and Kris Tebbs of the Corpus Christi IceRays.

Chaumont broke out of his mini-slump (scoreless in four straight games) in a big way scoring three points in each of the RiverKings games last week, both victories. In Friday’s 4-3 win versus Rio Grande Valley, the Sudbury, Ontario native scored the first goal for the RiverKings and assisted on two others including the game winner. He had a game-high 10 shots on net. In Saturday’s 5-3 win versus Laredo, the 6-0, 200-pound forward scored a first period goal and had two assists. For the season, the CHL All-Star leads the RiverKings with 22 goals and nine power play goals. His 38 points are second on the team.

Tebbs won all three starts for the IceRays last week, all on the road. During his hot stretch, the Calgary, Alberta native allowed five goals on 107 shots (.953 save percentage) and finished the week with a 1.67 goals against average. The 5-10, 170-pound goaltender’s wins came against Rapid City, Rocky Mountain and New Mexico. Tebbs is 13-10-3 on the season winning each of his last four starts vaulting the IceRays into the fifth and final playoff spot in the Southern Conference.

In recognition of their achievement, both Chaumont and Tebbs will receive a special gift from Oakley.